This is a follow-up post of the first edition of Exploiting hard filtered SQL Injections and at the same time a writeup for Campus Party CTF web4. In this post we will have a closer look at group_concat() again.

Last month I was invited to Madrid to participate at the Campus Party CTF organized by SecurityByDefault. Of course I was mainly interested in the web application challenges, but there was also reverse engineering, cryptography and network challenges. For each of the categories there was 4 difficulty levels. The hardest webapp challenge was a blind SQLi with some filtering. Techniques described in my last blogposts did not helped me so I had to look for new techniques and I promised to do a little writeup on this.
The challenge was a news site with a obvious SQLi in the news id GET parameter. For different id’s specified by the user one could see different news articles while a SQL error resulted in no article being displayed. The filter was like the “basic keyword filter” I already introduced here with additional filtering for SQL comments:

However no UNION SELECT worked, I had no FILE PRIV and guessing the table and column names was too difficult in the short time because they were in spanish and with different upper and lower case letters. So I decided to go the old way with parenthesis and a CASE WHEN:

As stated in my last post the output of group_concat() is limited to 1024 characters by default. This is sufficient to retrieve all table names because all default table names concated have a small length and there is enough space left for custom tables.
However the length of all standard columns is a couple of thousands characters long and therefore reading all column names with group_concat() is not easily possible because it will only return the first 1024 characters of concated standard columns of the database mysql and information_schema *.
Usually, the goal is to SELECT column names only from a specific table to make the result length smaller than 1024 characters. In case WHERE and LIMIT is filtered I presented a “WHERE alternative” in the first part:

Here I co-SELECTed the column table_name to use it in the HAVING clause (otherwise the error Unknown column ‘table_name’ in ‘having clause’ would occur). In a subSELECT you cannot select from more than one column and this is where I struggled during the challenge. The easiest way would have been to use GROUP BY with %a0 as delimiter:

But what I tried to do is to find a way around the limiting 1024 character of group_concat(). Lets assume the keywords “group” and “having” are filtered also 😉 First I checked the total amount of all columns:

Well thats not correct yet, because we have to add the commas group_concat() adds between each column. That is additional 186 characters which exceeds the maximum length of 1024. So we take only 4 characters per column_name:

To avoid finding the right offset where the user tables starts I began to extract column name by column name from the end, until I identified columns of the default mysql database (a local mysql setup helps a lot).

I think the following graphic helps to get a better idea of what I did.
The first SELECT shows a usual group_concat() on all column names (red blocks with different length) that misses the columns from user-created tables that appear at the end of the block list.
The second query concatenates only the first 4 characters (blue) of every name to make the resultset fit into the 1024 character limit. In the same way the next block of 4 characters can be SELECTed (third query). 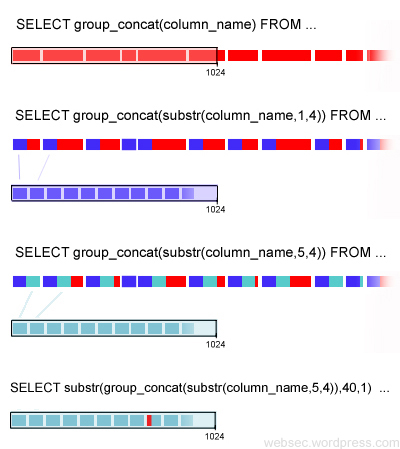 Each string of concatenated substrings can be read char by char to reconstruct the column names (last query).

It gets a bit tricky when the offsets change while reading the second or third block of 4 characters and you need to keep attention to not mix up the substrings while putting them back together for every column name. A little PHP script automated the process and saved some time. Although this approach was way to complicated to solve this challenge, I learned a lot 😉
In the end I ranked 2nd in the competition. I would like to thank again SecurityByDefault for the fun and challenging contest, especially Miguel for the SQLi challenges and give kudos to knx (1st), aw3a (3rd) and LarsH (the only one solving the tough reversing challenges).

By the way the regex filters presented in the last posts are not only for fun and challenges: I have seen widely used community software using (bypassable) filters like these.

* Note that the exact concated length and amount of columns and tables depends on your MySQL version. Generally the higher your version is, the more column names are available and the longer is the concated string. You can use the following queries to check it out yourself:

This entry was posted on Wednesday, May 26th, 2010 at 12:30 am and is filed under SQLi, Web Security. You can follow any responses to this entry through the RSS 2.0 feed. You can skip to the end and leave a response. Pinging is currently not allowed.